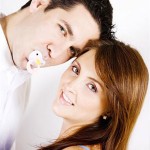 Sucking on your baby’s dummy seems to help guard them against infant eczema. A Swedish study at Gothenburg university reported that a parent sucking on the dummy before giving it to their children may give considerable protection against the development of eczema later in life.

The study found that an infant’s exposure to parental saliva has been associated with reduced rates of eczema at  as the baby grows.

The Swedish team followed a group of 184 children in the first 6 months of their life. Their research questions determined how parents cleaned their dummy before giving it to their children. The majority of the parents rinsed the dummy before giving it to the child and a proportion sucked on the dummy themselves before popping it into their child’s mouth.

Dummy use alone was shown to have no significant effect on the development of allergies, the infant eczema reduction effect was dependent on exposure to parent’s saliva. The act of boiling pacifiers as a cleaning method also was not seen to reduce incidence of infant eczema.

Other factors that can affect  eczema development in infants, such as Caesarean delivery and  allergy in the parents, were also studied and the infant eczema benefit from parental dummy sucking was still evident.

Saliva contains bacteria and viruses and the researchers believe that the parent’s harmless oral microbes are transferred to their child via the dummy.

This finding ties in with the ‘hygiene hypothesis’, that is, that the allergies (including infant eczema and adult eczema)  may develop due to  reduced exposure to microbes during early infancy. It is theorised that when an baby’s immune system is under-stimulated by bacteria and virus; it increases the chance of abnormal immune reactions (allergies) later in life.

Powered by WordPress Designed by